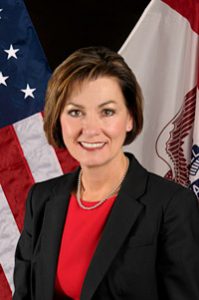 Corbett, who was considering seeking the governorship even before former Gov. Terry Branstad was nominated by President Donald Trump to become the U.S. ambassador to China, has made it official: He’s running against Kim Reynolds for the 2018 Republican gubernatorial nomination. Gov. Reynolds, who has twice been elected to statewide office, was elected to the state Senate in 2008. As Iowa’s first female governor, she’s a political star in her own right, and made a smart choice in selecting conservative Adam Gregg as her lieutenant governor.

Iowans have faced eerily similar choices before, which can provide clues to next year’s outcome.

Between 1972 and 1994, Iowa was the scene of three intra-party primary battles that all involved incumbent GOP chief executives. In 1972, then-Gov. Bob Ray and his lieutenant governor, Roger W. Jepsen, fought it out. Jepsen, who later served as a U.S. senator, was a conservative; Ray, a moderate. It wasn’t close. Ray then coasted to a landslide re-election in the fall of 1972 and was re-elected in 1974 and 1978.

The next party-splitting fight came in 1976, in that year’s presidential race. Incumbent Gerald Ford had taken office in 1974 when Richard Nixon resigned. Ronald Reagan, who had deep and longstanding ties to Iowa, was the darling of the conservatives; Ford, while no liberal, was favored by moderates who had backed Ray four years earlier. Reagan’s throw-down with Ford was hard-fought, contentious and went down to the wire. The incumbent won 19 delegates to the challenger’s 17. President Ford was nominated at the Republican National Convention before losing to Jimmy Carter in the general election.

The next embattled incumbent was Terry Branstad, who in 1994 was challenged by then-U. S. Rep. Fred Grandy. Branstad prevailed by 51.8 percent to 48.1 percent, effectively ending Grandy’s political career. In each of these contests, the challengers presented starkly different alternatives to the incumbents.

So, why was it that a future president and a future U.S. senator — neither of whom had ever lost elections — weren’t able to win, even against an incumbent who had taken office via the succession route? Partly because the Iowa Republican Party and its activists supported each of these incumbents. Then there’s the reasoning of the voters: If something is working, or even if it’s simply not broken, then why try to fix it? The fundraising power of incumbency and the advantageous trappings of office also can’t be overlooked — as Jepsen, Reagan and Grandy all learned the hard way.

The last time an incumbent Iowa governor was defeated in a primary was in 1948. That year, Gov. Robert D. Blue, a conservative, lost to state Rep. Bill Beardsley, a moderate who was elected to three terms as governor before dying in office in 1954.

Mr. Corbett is no slouch at besting incumbents. In 1994, he ousted the incumbent speaker of the Iowa House, Harold Van Mannen. He was re-elected as speaker in 1996. Since 1986, he has won two landslide elections as mayor of Cedar Rapids and seven consecutive elections to the Iowa Legislature. But in his upcoming fight with Gov. Reynolds, history, for the most part, isn’t on his side.

Todd A. Blodgett of Clear Lake served on the White House staff of President Ronald Reagan, and on the presidential campaign staff of George H. W. Bush. He also worked for the Republican National Committee and the FBI.

This column was published in the Des Moines Register on July 4, 2017. It can be read here: http://www.desmoinesregister.com/story/opinion/columnists/iowa-view/2017/07/04/history-favors-reynolds-match-against-corbett/447294001/