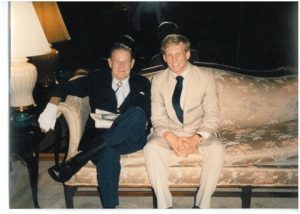 J. Neil “Moon” Reagan helped to line up his younger brother’s employment with General Electric and as the host of TV’s “Death Valley Days.”

In Frank Gannon’s review (Bookshelf, Feb. 5) of the otherwise excellent book “The Reagan Enigma: 1964-1980” by Thomas C. Reed, the late President’s brother, J. Neil Reagan, is “dismissed as a self-interested hack.” Nothing could be more untrue.

J. Neil “Moon” Reagan helped to line up his younger brother’s employment with General Electric and as the host of TV’s “Death Valley Days.” As a press aide to Barry Goldwater’s 1964 presidential campaign, Neil Reagan was highly instrumental in arranging for Ronald Reagan to address a nationwide TV audience on behalf of the Republican ticket that year. That speech became Reagan’s national political debut, and it led to him being touted by the GOP as a prospective governor.

On several occasions when I served on President Reagan’s White House staff, the late president told me he was “eternally grateful” for his brother’s advice and advertising expertise in all of his political campaigns. Decades before Maureen Reagan began urging her father to switch parties, Neil Reagan was a registered Republican. Absent the brotherly influence of Moon Reagan, the “prairie fire” of conservatism lit by America’s 40th president would have lacked a pivotal spark.

NOTE: As published in The Wall Street Journal on February 17, 2015